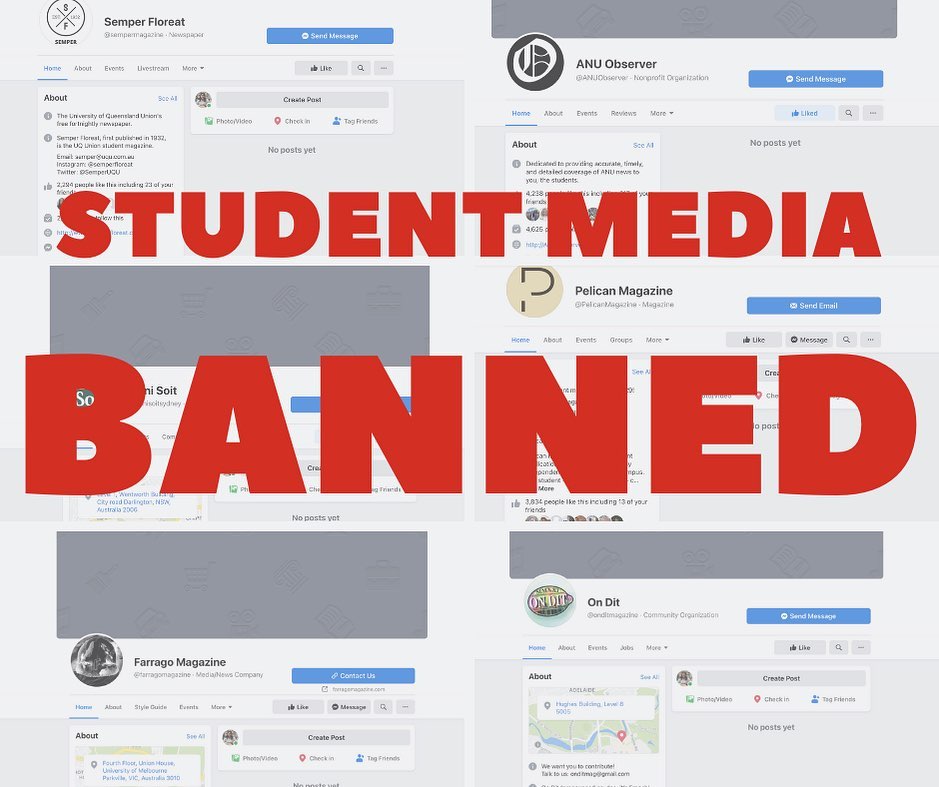 On Thursday, over 1 million students across the country woke up to find their student media outlets missing from Facebook.

This decision from Facebook during Orientation Week, the most crucial time of the year for students, means that thousands of young people across the country will struggle to find out crucial information about their campus.

In a year where over half of our Orientation Weeks are online only, 160,000 International Students are stuck overseas and states are in and out of lockdown, we need access to student media more than ever.

Appallingly, Facebook has also restricted the pages of critical support services such as mental health and sexual assault reporting services. Following the coverage of Brittany Higgins’ alleged assault, support and disclosure services are needed by the community more than ever.

For many seeking help, information is no longer readily available on the nation’s most popular social media platform.

NUS President Zoe Ranganathan has called the banning of support services a “gross oversight” and a “careless move that puts vulnerable students in danger”. Further, she is calling on Facebook to immediately review the list of organisations banned and make support services and university student media outlets exempt.

The University of Technology Sydney Students’ Association publication Vertigo has gone further, stating that the ban is “a grievous impediment to democracy and journalism”. The ANU’s Woroni have highlighted that “as non-commercial student media, we do not believe we fall under [the government’s proposed news code]”.

The NUS, alongside the 27 other co-signatories below, call on Facebook to review their ban on media and make essential services and student union media outlets exempt from the ban. Otherwise, we assure that students and young people will look to other social media platforms who we can rely on in the future

(Co-signatories listed in pdf below)