January 26th – Not the Date to Celebrate 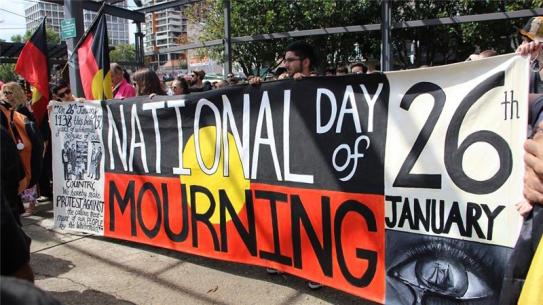 This Tuesday January 26 will mark 233 years of the colonial project known as Australia. It marks the start of dispossession and oppression for this country’s First Peoples. Our presence is a reminder to the settler-state, that their continued genocide has not and will not erase us. Protests on January 26th should not be limited to just this day, but the conversation must continue on and the movement must continue to grow.
January 26 is not a date to celebrate. The foundations of this country are built on the deaths and forced removals of First Nations Peoples, and the desecration of our sacred countries for ‘straya’ to exist. These foundations were never created with First Nations people in mind. Sovereignty was not ceded with the planting of the union jack. Such foundations have put First Nations youth and students significantly more at risk of not attaining their right to education than their non-Indigenous counterparts.
As at February 2020, there were 17,979 Aboriginal and Torres Strait Islander children living in out-of-home care. First Nations children are now 10.6 times more likely to be removed from their families – that rate is projected to double by 2030.
Only 40.5 per cent of Indigenous students who commenced university studies in 2010 had completed a degree by 2015, and only one half of Indigenous students attend school consistently.
We cannot celebrate a holiday that is built upon the bones of our First Nations brother, sister and sibling ancestors.
Until we have reconciled the atrocities that have been, and continue to be, committed against Indigenous people, we cannot celebrate what makes this country great.
NUS supports the struggle of First Nations people for sovereignty, for justice, for land and for genuine self-determination.

NUS condemns the on-going celebration of Australia Day as an event that is a symbol of the ongoing oppression of First Nations people and whitewashes the history of genocide.

NUS encourages all students to show their support to their Aboriginal and Torres Strait Islander Brothers and sisters and attend.